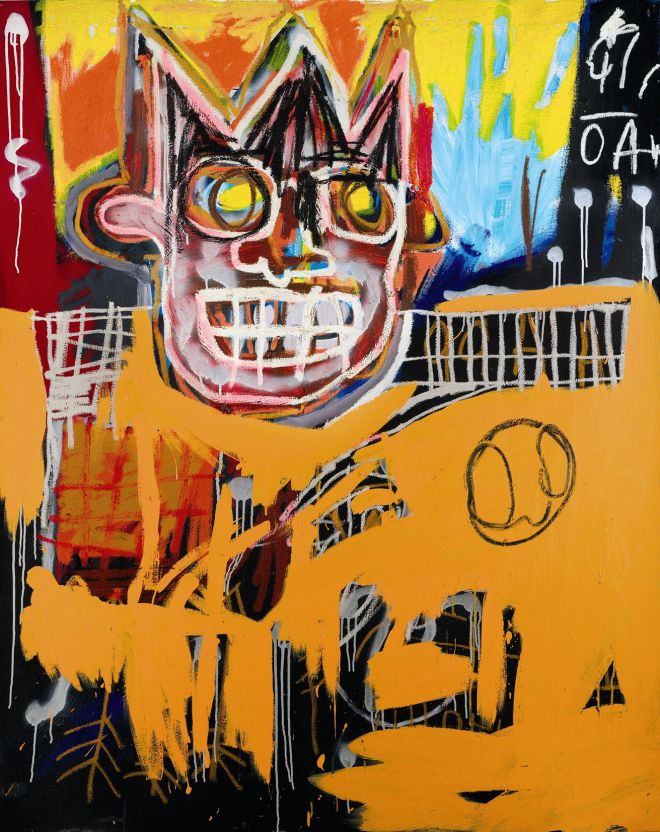 Untitled artwork of a ‘sports figure’ by Jean-Michel Basquiat, 1982

From my years of basketball consumption (not literal), I’ve found that the community of viewers and critics alike can be divided into two sects of the same religion; those that worship the minutiae of analytics and those that worship the pageantry. Then there are those of us who dabble in both; the agnostics who treat the content NBA basketball produces as a charcuterie board of both art and spreadsheets (PER36 would be the inedible decorative olives). Lately, I catch myself discussing basketball sequences as if I’m describing choreography. I reference iconic games as though they’re standstill canvases. Players are “graceful” or “elegant”, moves are “innovative” or “redundant”. But it doesn’t end there! The showmanship extends to the stories players and fans architect in order to add some imagined stakes to this collective experience. It’s no longer men bouncing a ball on hardwood when you immerse yourself into the world of its context. It’s a battle of uniformed soldiers. A clash of cultures. There’s the conquering of ‘Lebronto’, the fall of the Warriors, the emergence of a Grecian demigod in the cheese state, the Bearded One’s shrinking window of opportunity in his quest for glory. I could go on but we’ll end up talking Shakespeare and, no.

At the end of the day, we love to watch professional basketball because it’s a gorgeous and dramatic game. And as an ode to its beauty, here are two conference matchups that I’d frame if I could because, like you, I love drama and pretty things.

the proletariat vs. the bourgeoisie

The battle of Los Angeles has been a headline all season, and deservedly so. After securing his second finals MVP trophy by age 28, Kawhi Leonard was suspected to head to his birthplace of L.A. What people did not know was whether he’d team up with the greatest player of the era, Lebron James, or make the trek all the way to the same arena and join the Clippers, who’d been eyeing him during his entire season with the Toronto Raptors. Viewers were blinded sided by his ultimate decision to join the Clippers alongside Paul George, but the viewing community equally rejoiced at the prospect of a few more years of league parity and unpredictable series outcomes.

A city with two teams naturally draws comparisons but, to my joy, the stark contrasts between a glamorous Lakers franchise and a ragtag Clippers squad was exasperated by marketing throughout the season. The Clippers’ 1-minute promotional video featured phrases that included, but aren’t limited to; “grit over glamour,” “driven over given,” “the people of our city sweat and lead uncelebrated, we play for them,” “the right way over the easy way.” Get the gist? It was Hollywood vs Inglewood (working class town and future location of the Clippers’ mega-arena). Spotlights vs streetlights. Bourgeoisie vs proletariat. Kinda genius to promote the organization as the clear blue-collar, Los Angelenos’ choice. The fact that this campaign is funded by one of the richest men on earth is deeply funny, and whether it works will take some years of cultivation, but boy does this add some storytelling substance for fans.

This doesn’t even cover the other subplot present in this series. Lebron is widely regarded as the pinnacle of excellence for a generation of players, fresh off of over decade of dominance. Kawhi Leonard is also widely regarded as the player to challenge James’ seat at the table as the undisputed face of L.A. Two technically sound, 2-way small forwards not bound by physics duking it out for a minimum of 4 games on opposing top teams? In the same town? Are you king me? With this potential conference matchup, we’d be either witnessing the beginning or end of an era. I’m fine with the most dramatic outcome, whatever it may be.

TORONTO vs. BOSTON: RAPTORS vs. CELTICS

Cloaking biases to give the illusion of objectivity is overrated and honestly more sinister than being forthright with our underlying beliefs. Do I hail from West Toronto? Yes. Do I enjoy the Toronto Raptors? Absolutely. Do I believe that the derailment of Pascal Siakam’s youth pastor aspirations in Cameroon was a kind of divine intervention of sorts, rendering his late blooming NBA career a Holy experience for some of us fans? Hell yeah, fucking right. Prejudices aside, the defending champions’ current NBA season is continuously described as ‘storybook’ because you literally can’t write a better follow up to the zenith of professional basketball success- that Larry O’Brien trophy. Many preseason projections questioned the competitiveness the current squad would be capable of. How did the team answer? By mainlining swagger and joy, refusing to be defined by the past year’s successes. Among the pleasant surprises; Kyle Lowry is aging like summer wine, Norman Powell seems to have put all the pieces of his arsenal in the same fanny pack and Fred Vanvleet has begun to carry himself with the stoic confidence the point guard of any top team requires. Sitting atop the conference in the standings, only behind the Milwaukee Bucks, the Raptors have shown us that sans finals MVP, there is a dignity in their title defense.

Seeded closely behind Toronto are the Boston Celtics. Coming off their own nightmarish fever dream featuring third-eye poking, astral plane inhabiting, alkaline water drinking, saucy point guard Kyrie Irving. You don’t need me to reiterate the happenings of the Celtics’ 2018-2019 season because frankly, it gives me heart palpitations. But what I do know is that Kyrie himself admitted to embracing the role of locker room shit disturber as a means to light a spark. What we didn’t get was the inspired youth core rallying behind their fully healthy leader Kyrie may have expected. Instead, we saw a collection of depressed and burnt out kids dragging through every game, clearly exhausted by the antics of their eccentric (and saucy) point guard. In comes the knight of this tale, World renowned easy goer Kemba Walker (one must be easy going in order to tolerate years of owner MJ). Seamlessly filling in the void within a broken team, Kemba’s presence seems to have unlocked the game for the Jays (Jaylen and Jayson). We see an invigorated collection of guys that seem to love playing together, and I can get with that. A Raptors and Celtics matchup has been in order for years. It would be a joyous spectacle full of youthful exuberance, defensive excellence, offensive inventiveness and non-conformist coaching.

Two teams shedding insecurities, both real and perceived, to expose growth and innovation. We’d (I’d) love to see it.